誰在舉旗？Who’s Holding Up a Banner?

A local person is holding up a local banner, seemingly eager to express his position. Feeling quite anxious, his movements appear quite exaggerated. The more he wants others to see him, the more misunderstanding is caused. People have misunderstood that he is taking an opposing stance, but in actuality, his mind is just filled with his own strong belief; he is in a very strong agreement with himself.

An outsider is holding up a non-local banner. The small banner flutters as he gently shakes it. All the while he is enthusiastically reminding everyone that, “This is Taiwan, and it was known as Formosa. It is an island with spring-like weather year round.” The person appears like an experienced foreign guide, but he has only just memorized those lines for the guided tour a week ago. There is no deceit in the motive behind his words, as he is only taking in a story that he has not personally experienced, with the content perceived by his eyes and then directly transmitted out of his mouth.

Indonesian artist of Chinese descent, Yaya Sung, came to Treasure Hill in Taipei for a residency project. Throughout her short-stay of 72 days, she was assigned to stay in Room 4-4. The Chinese language was banned for years under the regime of the New Order, which is why Yaya Sung holds a sense of fear for and is also unable to speak Chinese; however, as she arrived in Taiwan where Mandarin Chinese is spoken, Sung then realized she’s like a ghost that is unable to speak. Although present on site, because of the language barrier, people were not able to understand her nor could they see her. It felt like Room 4-4 or Room “Death” was a House of Ghost without a Tongue (the pronunciation of the number 4 in Mandarin is nearly homophonous to the word “death”).

Because of her Chinese descent, Yaya Sung has felt uneasy in Indonesia. She has attempted to come to Treasure Hill with feelings of a foreigner returning home, where she has met another group of foreigners calling the place home. She has observed quietly there while her heart pounded vigorously. As a spectator of the stories in Treasure Hill, Yaya Sung is also someone who has been through similar experience. The site-specific artwork she has created in Taiwan is not intended to speak on behalf of anyone else, because others don’t have the position or power to speak or interpret for those that have personally experienced those stories. All that we can do is to share our observations and our thoughts.

“What is your favorite flower?” asks Yaya Sung. The word for flower in Indonesian, Kembang, is a word that signifies something that is of power and embodies curiosity; it indicates the process of life, a journey. The question is perhaps dedicated to anyone who is going through the process, with possible answers for things in life that are difficult to respond to. 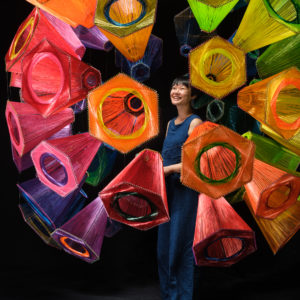 or Login with
忘記密碼？
註冊

or Login with
忘記密碼？
登入